Today is the day for huge VC returns.

We talked a bit about Sequoia’s coming huge win with the IPO of game engine Unity this morning. Now, Sequoia might actually have the second largest return among companies filing to go public with the SEC today.

Snowflake filed its S-1 this afternoon, and it looks like Sutter Hill is going to make bank. The long-time VC firm, which invests heavily in the enterprise space and generally keeps a lower media profile, is the big winner across the board here, coming out with an aggregate 20.3% stake in the data management platform, which was last privately valued at $ 12.4 billion earlier this year. At its last valuation, Sutter Hill’s full stake is worth $ 2.5 billion. My colleagues Ron Miller and Alex Wilhelm looked a bit at the financials of the IPO filing.

Sutter Hill has been intimately connected to Snowflake’s early build-out and success, providing a $ 5 million Series A funding back in 2012, the year of the company’s founding, according to Crunchbase.

Now, there are some caveats on that number. Sutter Hill Ventures (aka “the fund”) owns roughly 55% of the firm’s total stake, with the balance owned by other entities owned by the firm’s management committee members. Michael Speiser, the firm’s partner who sits on Snowflake’s board, owns slightly more than 10% of Sutter Hill’s stake directly himself according to the SEC filing.

In addition to Sutter Hill, Sequoia also got a large slice of the data computing company: its growth fund is listed as having an 8.4% stake in the coming IPO. That makes for two Sequoia Growth IPOs today — a nice way to start the week this Monday afternoon.

To see the breakdown in returns, let’s start by taking a look at the company’s share price and carrying values for each of its rounds of capital: 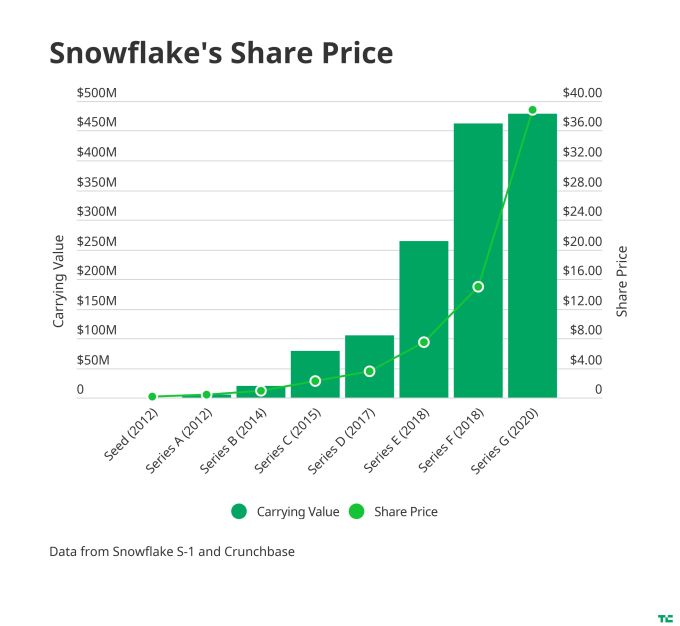 On top of that, what’s interesting is that Snowflake broke down the share purchases by firm for the last four rounds (D through G-1) the company fundraised: 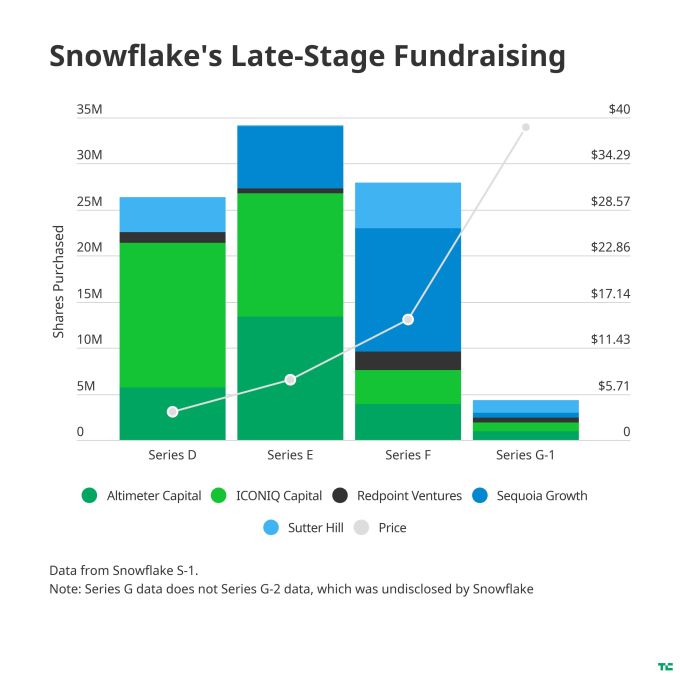 That level of detail actually allows us to grossly compare the multiples on invested capital for these firms.

Sutter Hill, despite owning large sections of the company early on, continued to buy up shares all the way through the Series G, investing an additional $ 140 million in the later-stage rounds of the company. Adding in the entirety of its $ 5 million Series A round and a bit from the Series B assuming pro rata, the firm is looking on the order of a 16x return (assuming the IPO price is at least as good as the last round price).

Sequoia’s multiple on investment is capped a bit given that it only invested in the most recent funding rounds. Its 8.4% stake was purchased for nearly $ 272 million, all of which came in these late-stage rounds. At Snowflake’s last round valuation of $ 12.4 billion, Sequoia’s stake is valued at $ 1.04 billion — a return of slightly less than 4x. That’s very good for mezzanine capital, but nothing like the multiple that Sutter Hill or Redpoint got for investing early.

Doing the same back-of-the-envelope math and Altimeter is looking at a better than 6x return, and ICONIQ got 7x. As before, if the stock zooms up, those returns will look all the better (and of course, if the stock crashes, well…)

One final note: The pattern for these last four funding rounds is unusual for venture capital: Snowflake appears to have “spread the love around,” having multiple firms build up stakes in the startup over several rounds rather than having one definitive lead.

Zara Tindall pictured for first time since pregnancy announcement – ‘Congrats on the bump!

GSK wins approval for three-in-one inhaler in US

Do it now! Boris urged to put June 21 reopening on hold – Emergency...

Near raises $100M for an AI that merges online and offline...