UK telecoms regulator Ofcom has published a new joint report and stat-fest on Internet attitudes and usage with the national data protection watchdog, the ICO — a quantitative study to be published annually which they’re calling the Online Nation report.

The new structure hints at the direction of travel for online regulation in the UK, following government plans set out in a recent whitepaper to regulate online harms — which will include creating a new independent regulator to ensure Internet companies meet their responsibilities.

Ministers are still consulting on whether this should be a new or existing body. But both Ofcom and the ICO have relevant interests in being involved — so it’s fitting to see joint working going into this report.

“As most of us spend more time than ever online, we’re increasingly worried about harmful content — and also more likely to come across it,” writes Yih-Choung Teh, group director of strategy and research at Ofcom, in a statement. “ For most people, those risks are still outweighed by the huge benefits of the internet. And while most internet users favour tighter rules in some areas, particularly social media, people also recognise the importance of protecting free speech – which is one of the internet’s great strengths.”

While it’s not yet clear exactly what form the UK’s future Internet regulator will take, the Online Nation report does suggest a flavor of the planned focus.

The report, which is based on responses from 2,057 adult internet users and 1,001 children, flags as a top-line finding that eight in ten adults have concerns about some aspects of Internet use and further suggests the proportion of adults concerned about going online has risen from 59% to 78% since last year (though its small-print notes this result is not directly comparable with last year’s survey so “can only be interpreted as indicative”).

Another stat being highlighted is a finding that 61% of adults have had a potentially harmful online experience in the past year — rising to 79% among children (aged 12-15). (Albeit with the caveat that it’s using a “broad definition”, with experiences ranging from “mildly annoying to seriously harmful”.)

While a full 83% of polled adults are found to have expressed concern about harms to children on the Internet.

The UK government, meanwhile, has made child safety a key focus of its push to regulate online content.

At the same time the report found that most adults (59%) agree that the benefits of going online outweigh the risks, and 61% of children think the internet makes their lives better.

While Ofcom’s annual Internet reports of years past often had a fairly dry flavor, tracking usage such as time spent online on different devices and particular services, the new joint study puts more of an emphasis on attitudes to online content and how people understand (or don’t) the commercial workings of the Internet — delving into more nuanced questions, such as by asking web users whether they understand how and why their data is collected, and assessing their understanding of ad-supported business models, as well as registering relative trust in different online services’ use of personal data.

The report also assesses public support for Internet regulation — and on that front it suggests there is increased support for greater online regulation in a range of areas. Specifically it found that most adults favour tighter rules for social media sites (70% in 2019, up from 52% in 2018); video-sharing sites (64% v. 46%); and instant-messaging services (61% v. 40%).

At the same time it says nearly half (47%) of adult internet users expressed recognition that websites and social media platforms play an important role in supporting free speech — “even where some people might find content offensive”. So the subtext there is that future regulation of harmful Internet content needs to strike the right balance.

Those conditions look to be key, though — with only small minorities reporting they are happy for their personal data to be used to program content (17% of adult Internet users were okay with this); and to target them with ads (only 18% didn’t mind that, so most do).

Trust in online services to protect user data and/or use it responsibly also varies significantly, per the report findings — with social media definitely in the dog house on that front. “Among ten leading UK sites, trust among users of these services was highest for BBC News (67%) and Amazon (66%) and lowest for Facebook (31%) and YouTube (34%),” the report notes.

Despite low privacy trust in tech giants, more than a third (35%) of the total time spent online in the UK is on sites owned by Google or Facebook.

And while the report records relatively high awareness that personal data collection is happening online — finding that 71% of adults were aware of cookies being used to collect information through websites they’re browsing (falling to 60% for social media accounts; and 49% for smartphone apps) — most (69%) also reported accepting terms and conditions without reading them.

So, again, mainstream public awareness of how personal data is being used looks questionable.

The report also flags limited understanding of how search engines are funded — despite the bald fact that around half of UK online advertising revenue comes from paid-for search (£6.7BN in 2018). “[T]here is still widespread lack of understanding about how search engines are funded,” it writes. “Fifty-four per cent of adult internet users correctly said they are funded by advertising, with 18% giving an incorrect response and 28% saying they did not know.”

The report also highlights the disconnect between time spent online and digital ad revenue generated by the adtech duopoly, Google and Facebook — which it says together generated an estimated 61% of UK online advertising revenue in 2018; a share of revenue that it points out is far greater than time spent (35%) on their websites (even as those websites are the most visited by adults in the UK).

As in previous years of Ofcom ‘state of the Internet’ reports, the Online Nation study also found that Facebook use still dominates the social media landscape in the UK.

Though use of the eponymous service continues falling (from 95% of social media users in 2016 to 88% in 2018). Even as use of other Facebook-owned social properties — Instagram and WhatsApp — grew over the same period.

The report also recorded an increase in people using multiple social services — with just a fifth of social media users only using Facebook in 2018 (down from 32% in 2018). Though as noted above, Facebook still dominates time spent, clocking up way more time (~23 minutes) per user per day on average vs Snapchat (around nine minutes) and Instagram (five minutes).

A large majority (74%) of Facebook users also still check it at least once a day. 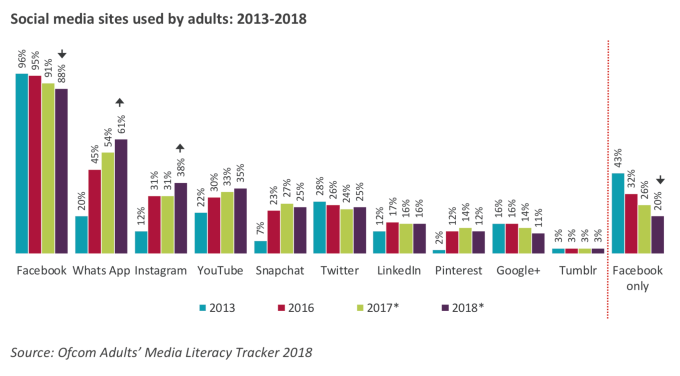 Overall, the report found that Brits have a varied online diet, though — on average spending a minute or more each day on 15 different internet sites and apps. Even as online ad revenues are not so equally distributed.

There is also variety when it comes to how Brits search for stuff online, and while 97% of adult internet users still use search engines the report found a variety of other services also in the mix.

It found that nearly two-thirds of people (65%) go more often to specific sites to find specific things, such as a news site for news stories or a video site for videos; while 30% of respondents said they used to have a search engine as their home page but no longer do.

The high proportion of searches being registered on shopping websites/apps (61%) also looks interesting in light of the 2017 EU antitrust ruling against Google Shopping — when the European Commission found Google had demoted rival shopping comparison services in search results, while promoting its own, thereby undermining rivals’ ability to gain traffic and brand recognition.

The report findings also indicate that use of voice-based search interfaces remains relatively low in the UK, with just 10% using voice assistants on a mobile phone — and even smaller percentages tapping into smart speakers (7%) or voice AIs on connected TVs (3%). 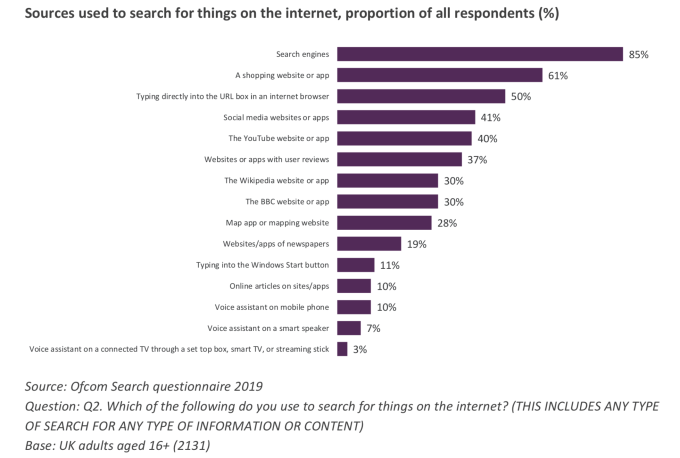 In another finding, the report suggests recommendation engines play a major part in content discovery.

“Recommendation engines are a key way for platforms to help people discover content and products — 70% of viewing to YouTube is reportedly driven by recommendations, while 35% of what consumers purchase on Amazon comes from recommendations,” it writes.

While, each week, 44 million Brits use the internet to send or receive email; 29 million send instant messages; 30 million bank or pay bills via the internet; 27 million shop online; and 21 million people download information for work, school or university.

The full report can be found here. 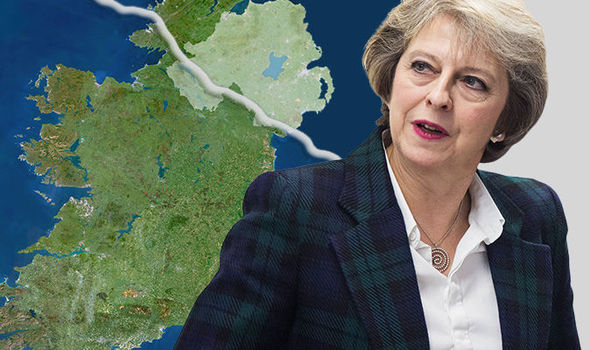 Oriental Circlet Tiara: Queen Victoria’s £6.5million diadem the Queen has only worn once

Backed by Expa, Aero is a premium air travel startup with...