For the past decade, Brian Faux has been fighting on the front lines of housing finance. In between pursuing a career in mortgage lending and holding stints at Freddie Mac and Wells Fargo, Faux spent more than two years in the detritus of the 2008 financial crisis advising the Department of Housing and Urban Development on how to recover the housing markets through the creation of the Distressed Asset Stabilization Program.

Now Faux, along with co-founders Nora Apsel and Adam Rothblatt, is working to take those hard-learned lessons and build a streamlined and simple mortgage broker online, particularly for first-time homebuyers. Through New York City-based Morty, the trio and their team have launched a tool that allows homebuyers to understand exactly what their buying power is and which homes they can afford.

That product has captured the attention of investors. The company announced today an $ 8.5 million Series A fundraise led by Prudence Holdings, with participation from Lerer Hippeau and Thrive Capital, the firm which had led Morty’s seed round in 2017. Prudence, a family office managed by Gavin Myers, previously backed real estate brokering startup Compass, and the Morty team first met the firm through participation in Techstars New York.

With $ 3M in funding, Morty is launching a marketplace of mortgage lenders

Morty’s main product guides homebuyers through the process of getting mortgage pre-approval and then finding and signing a loan with a mortgage lender. Through a “Home Financing Score,” the platform visually breaks down the factors that can lead to approval or rejection of a mortgage application, allowing users to optimize their finances to maximize their buying power.

While code operates much of the underwriting and origination process, there is a human touch as well. Faux explained that with current mortgage options, “It’s still too scary. It’s still too opaque, [so consumers] want that human interaction, eventually, but they just wanted it on their terms. And nobody’s kind of brought that to them” before Morty.

Apsel said that “As well as having a digital platform that automatically verifies and underwrites people so that they know exactly how much they qualify for, we also have have mortgage experts on staff available to help people through every step of the home buying process.”

She says that transparency and education have been key to Morty’s early indicators of success. “What we have found is that as long as you are communicating those things to all of the necessary parties — the homebuyer, the realtor, the title agent, everybody — it works. It’s the lack of transparency, and it’s the lack of communication that I think has frustrated this industry for so long,“ she said. 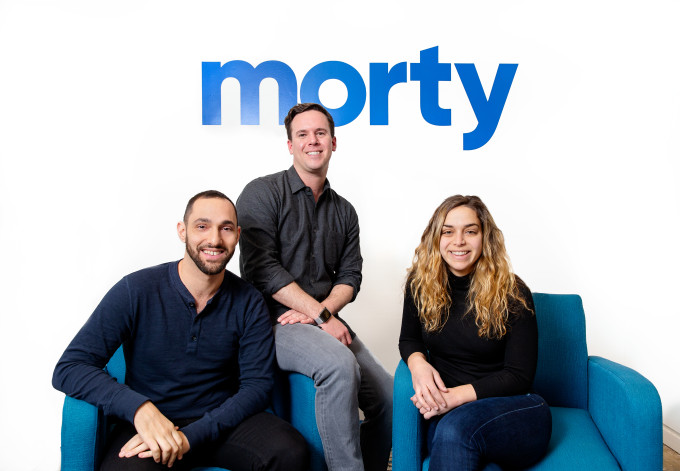 Morty, which at launch had licenses to operate in 10 states, has now expanded to cover 34 states. One notable exception though is New York, which is well-known for its particularly stringent and slow-moving licensing processes. The company is hoping to have full nationwide coverage in the years ahead.

Faux says that while the startup focuses on first-time homebuyers, there is nothing preventing the company from expanding to repeat home sales as well. “Once you build trust, and once you show them who you truly are, unbiased and just looking out for their well-being, they’ll come back to you,” he said.

Embedded finance, or why fintech mega VC rounds have become so common

Startups related to home buying have received intense attention from investors, with companies like Blend and Opendoor receiving nine-figure infusions of capital over the past few weeks. That said, Morty can also take advantage of incumbents like LendingTree, which aggregates loans in a variety of categories and is a Morty strategic partner. Morty’s differentiation is ultimately its focus on ease-of-use, as well as its wide licensing.

LendingTree is the secret success story of fintech

Updated: Changed language to describe LendingTree as a partner and not competitor of Morty.

In the age of consumerism, hospital ratings can make or break revenue

Join us for a live Q&A with Bessemer’s Byron Deeter next Tuesday at 3...