JobUFO, the Berlin-based startup that has built a video focussed app to help facilitate better job applications, has raised €2 million in seed funding. Leading the round is IBB and Hevella Capital, with the investment to be used for growth.

Claiming to re-invent the way companies handle the application process, JobUFO has developed an online/mobile application form that focuses on the personality of the candidate. This includes being asked to created a CV in a specific format and the ability to record or upload a personal application video. The JobUFO application form can be embedded anywhere online, such as a company’s career page or job ad, so that it becomes the preferred way to receive applications.

“The HR market is overloaded with too many information and recruiting tools,” JobUFO co-founder and CEO Thomas Paucker tells me when asked to describe the problem being tackled. “This makes it very hard to find the best process of applying to a job. That’s why everybody is writing the same motivational letters. You still need a laptop and there is no real first impression of yourself when you apply. Recruiters do not read motivational letters because someone else could have written it. The longer a recruiting process is, the higher the average dropout rate of an applicant”. 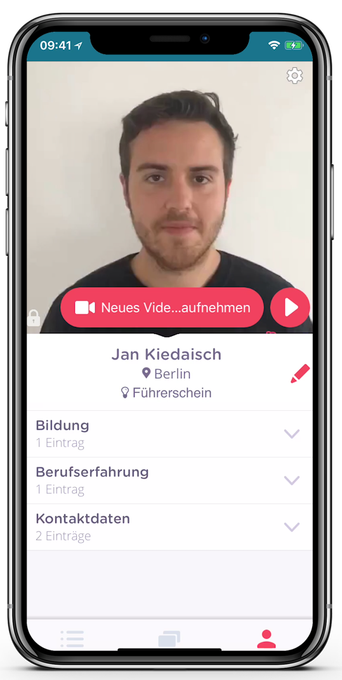 To remedy this, the JobUFO mobile app or web-version enables applicants to quickly create a “DIN-correct” CV in combination with a guided video of up to thirty seconds. Paucker says the idea is to be able to give a good first impression at the very moment the application is received. JobUFO powered applications are pushed directly into a company’s application tracking system via the JobUFO API.

“Recruiters get more and reliable applications without changing their daily routine,” he says. “Applicants get recommendations based on big data and are guided nearly fully automatically during their whole work life. Additionally we automate the communication between those two groups to focus on the main goal: filling the vacancy with someone who fits and likes the job”.

To that end, in two years since being founded, JobUFO has grown its customer base to over 30 well-known companies operating in Germany. They include Deutsche Bahn, Edeka, Evonik, Hertz, and Ikea. In 2018 alone, over 60,000 applications have been generated.

“Digitalisation is changing the recruiting sector,” adds Paucker, noting that younger applicants have no prior knowledge of a more traditional application process and are much more akin to using consumer apps such as Instagram and YouTube. “Since we guide the applicants directly through the application process, JobUFO is particularly popular with this younger target group,” he says.

In addition, the “talking application photos” concept is resonating with recruiters and HR managers since the last mile to the applicant is often the most time-consuming and least scalable. “The company sees the video as well as the checked data of the applicant directly in its own applicant management system. For both sides, this is an uncomplicated process that continues to spur us on to expand,” says the JobUFO CEO.

Top 50 global economies mapped: How the UK fares compared to Europe heading into 2022

Hopin might be the fastest growth story of this era

Christmas jewel tone outfit ideas from Topshop, Very, Next and Marks and Spencer

ECJ to rule on whether Facebook needs to hunt for hate...