ThoughtSpot was started by a bunch of ex-Googlers looking to bring the power of search to data. Seven years later the company is growing fast, sporting a fat valuation of almost $ 2 billion and looking ahead to a possible IPO. Today it announced a hefty $ 248 million Series E round as it continues on its journey.

The company wants to help customers bring speed to data analysis by answering natural language questions about the data without having to understand how to formulate a SQL query. As a person enters questions, ThoughtSpot translates that question into SQL, then displays a chart with data related to the question, all almost instantly (at least in the demo).

“The bar on delivering that kind of answer is very high and because of that, understanding intent is critical. We use AI for that. You could ask, ‘How did we do with red shoes in Portland?’ I could ask, ‘What is the profit margin of red shoes in Portland?’ The system needs to know that we both are asking the same question. So there’s a lot of AI that goes behind it to understand the intent,” Nair explained. 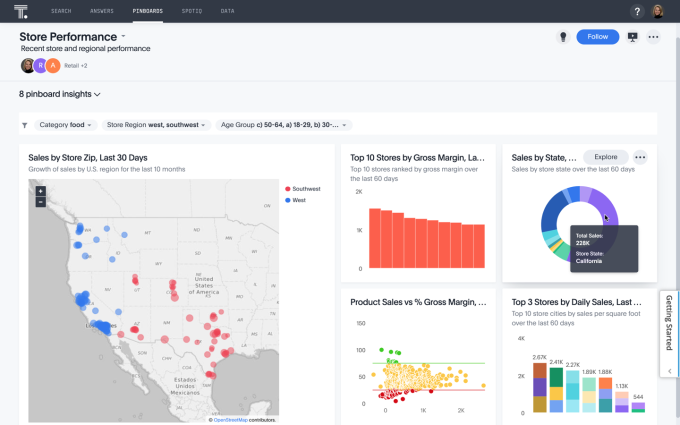 ThoughtSpot gets answers to queries by connecting to a variety of internal systems, like HR, CRM and ERP, and uses all of this data to answer the question, as best it can. So far, it appears to be working. The company has almost 250 large-company customers, and is on a run rate of close to $ 100 million.

Nair said the company didn’t necessarily need the money, with $ 100 million still in the bank, but he saw an opportunity, and he seized it. He says the money gives him a great deal of flexibility moving forward, including the possibility of acquiring companies to fill in missing pieces or to expand the platform’s capabilities. It also will allow him to accelerate growth. Plus, he sees the capital markets possibly tightening next year and he wanted to strike while the opportunity was in front of him.

Nair definitely sees the company going public at some point. “With these kind of resources behind us, it actually opens up an opportunity for us to do any sort of IPO that we want. I do think that a company like this will benefit from going public because Global 2000 kind of customers, where we have our most of our business, appreciate the transparency and the stability represented by public companies,” he said.

He added, “And with $ 350 million in the bank, it’s totally [possible to] IPO, which means that a year and a half from now if we are ready to take the company public, we can actually have all options open, including a direct listing, potentially. I’m not saying we will do that, but I’m saying that with this kind of funding behind us, we have all those options open.”

The economics and tradeoffs of ad-funded smart city tech