Okay, I’ll admit it: Sometimes, I write stories because I think they’re going to be popular. And sometimes, those stories fall flat anyway.

It makes sense — both on a cosmic level, because life isn’t fair, but also in the more specific sense that some topics are simply over-covered. Yes, people seem to like reading about Apple, but are they going to read my Apple post if it’s fiftieth story published on the same topic?

Analytics company Parse.ly is trying to address that very problem with a new feature in Currents, its free product highlighting broader audience trends. The feature is called “demand sorting,” because it points out the topics that are most “in demand” by the audience.

Demand, in this case, is determined by taking the total number of views for a topic and then dividing that by the number of articles. In other words, if a topic is in-demand, it’s attracting a lot of views but has been covered by relatively few stories — creating an opportunity for a writer looking for their next subject. 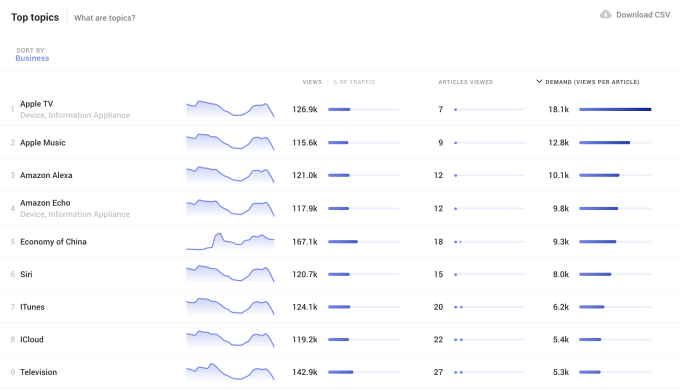 In part, CEO Sachin Kamdar said this is highlighting Parse.ly’s “differentiated data, showing what people are actually reading versus what people are sharing or searching for.”

So it’s not just a list of story subjects. You can compare the demand for different topics, and if you learn that (say) Amazon may be under-covered relative to Apple, you can also look more closely and see which Amazon-related topics are currently experiencing the most demand. And there’s historical data, so you can see the demand in past years for coverage around events like CES or the State of the Union, and plan accordingly.

When I wondered whether this will just give thirsty publications another number to chase — as opposed to focusing on what’s genuinely newsworthy or important — Kamdar replied, “It’s not like you can game this. It’s not something like slideshows, where you can generate X number of [slides] to increase your pageviews. It’s a unique person viewing a piece of content … In that sense, it stays a little bit truer what is actually of interest to people.”

I previously spoke to Kamdar about the need for new, non ad-based business models in the online news business. In our more recent discussion of  Currents, he suggested that one of the ways demand-sorting could evolve is a focus on “loyalty-based metrics” — so news organizations could see the topics that are driving people to return to their site and potentially sign up for subscriptions.

Benchmark and Tiger double down on going public

Queen Letizia glows in 50 shades of blue to meet Ukrainian...

Storm Oliver to HAMMER USA with COLDEST temperatures of season –...

Knock is the latest proptech said to be eyeing the public... 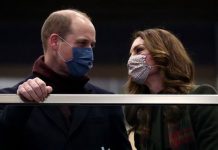