Collectively, this year’s newly public unicorns are doing pretty well too. Most priced shares around or above expectations. We’re also seeing a lot of impressive aftermarket gains. At least six are currently valued at more than $ 10 billion.

Meanwhile, unicorn M&A volumes are chugging along as well, with at least 11 deals so far this year. Big transactions like Walmart’s $ 16 billion acquisition of Flipkart and Microsoft’s $ 7.5 billion purchase of GitHub have helped boost the totals.

It all adds up to some enormous numbers. We’ll delve into those in more detail below, focusing on year-over-year comparisons, geographic breakdown, biggest exits and more.

How 2018 compares to prior years

First off, a bit of context. A lot of startup-related metrics are on track to hit multi-year or record highs in 2018. These are lofty times for supergiant funding rounds, venture capital fundraising and unicorn investment, to name a few. Given that pattern, it’s not surprising to see a pickup in unicorn exits too, including some really big names like Xiaomi, Spotify and Dropbox.

That said, if one focuses on anticipated exits, as opposed to the ones that already occurred, even this year’s phenomenal IPO streak may seem comparatively humdrum. There’s mounting excitement around the potential for even bigger offerings next year from Uber, Airbnb, Didi Chuxing and others.

If markets don’t implode in the next few months, and at least some of these household names make it to market, it’s likely 2019 will be an even bigger year for unicorn IPOs than 2018. Unfortunately, however, we don’t have hard data on the future, so we’re left comparing this year to the prior two in the chart below: 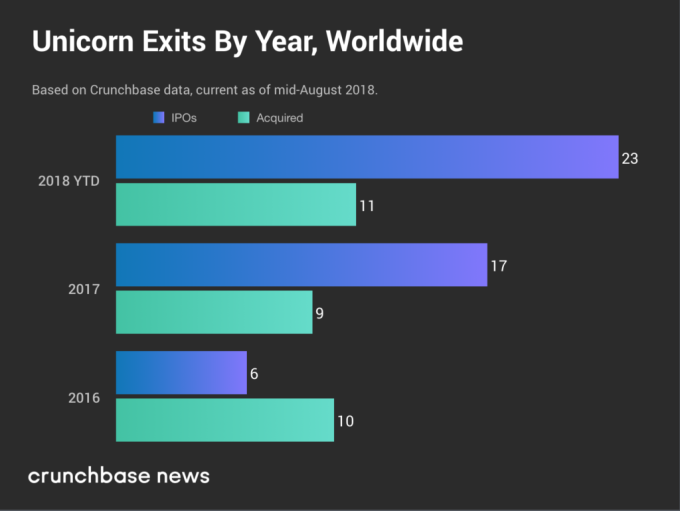 As you can see, we’re already well ahead of last year’s totals. On the IPO front, not only are the 2018 unicorn offerings more numerous, they’re also bigger. In 2017, out of 16 unicorn IPOs, there were two at initial valuations above $ 10 billion (Snap and online insurer ZhongAn). So far this year, there have been five.

The exiting unicorns are also a geographically diverse bunch, with the U.S. and China accounting for the lion’s share and Europe trailing a distant third.

In the chart below, we look at the geographic breakdown in more detail: 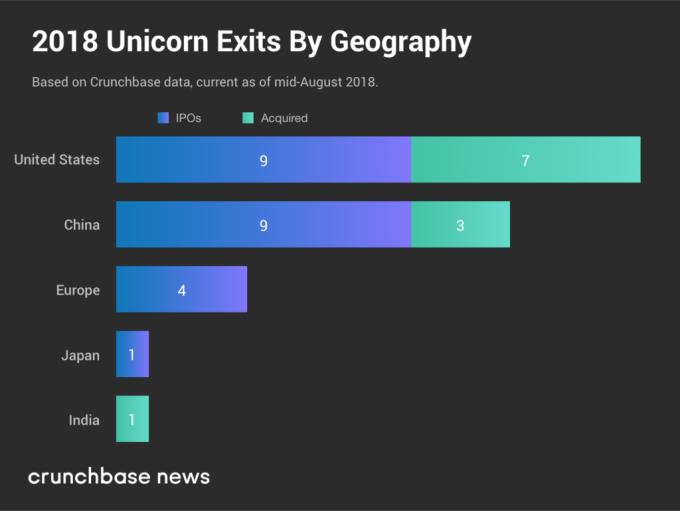 While the U.S. produced the largest number of unicorn exits, they weren’t the biggest. Notably, this year’s most valuable IPOs and M&A deal involved companies based in Europe and Asia.

Of the six 2018 debuts currently valued at $ 10 billion or more, detailed below, only one, Dropbox, is a U.S. company. In the chart below, we look at who topped the rankings: 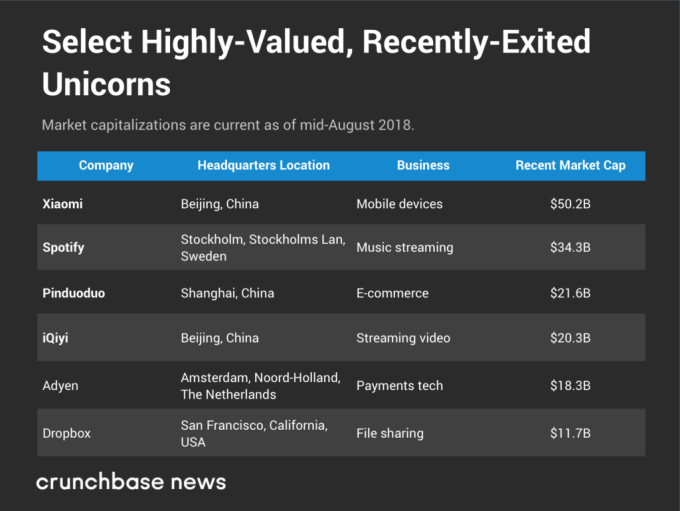 The grand tally of 2018 exits provides a clear counterpoint to skeptics (your author included), who questioned whether fast-growing unicorn populations and valuations would hold up with acquirers and public market investors.

It appears prices are keeping up nicely. The vast majority of U.S. unicorn exits this year, for instance, were close to or above private market valuations. Among U.S. IPOs the only big fizzle was Domo. While Dropbox looked like a “down round IPO” at first, strong aftermarket performance has the company above its highest reported private valuation.

All these giant exits add up. The unicorns that went public this year currently have a collective market capitalization north of $ 200 billion. Add in roughly $ 45 billion from M&A deals, and we’re talking close to a quarter of a trillion (!) dollars in post-exit value.

These big exits come as investors continue to funnel record sums into high-valuation private companies. So far this year, investors have poured more than $ 200 billion into venture and growth-stage startups, with more than $ 70 billion going into companies already valued at $ 1 billion or more.

In sum, we’re seeing big numbers all around — going in as investments and coming out as exits. Eventually, all parties wind down. But for now, this one rages on.

Melania Trump: FLOTUS opts for white to pick up ’Woman of Distinction’ award in...