When Cleo, the London-based “digital assistant” that wants to replace your banking apps, quietly entered the U.S., the company couldn’t have expected to be an instant hit. Many better-funded British startups have failed to “break America.” However, just four months later, the fintech upstart counts 350,000 users across the pond — claiming more than 600,000 active users in the U.K., U.S. and Canada in total — and says it is adding 30,000 new signups each week. All of which hasn’t gone unnoticed by investors. 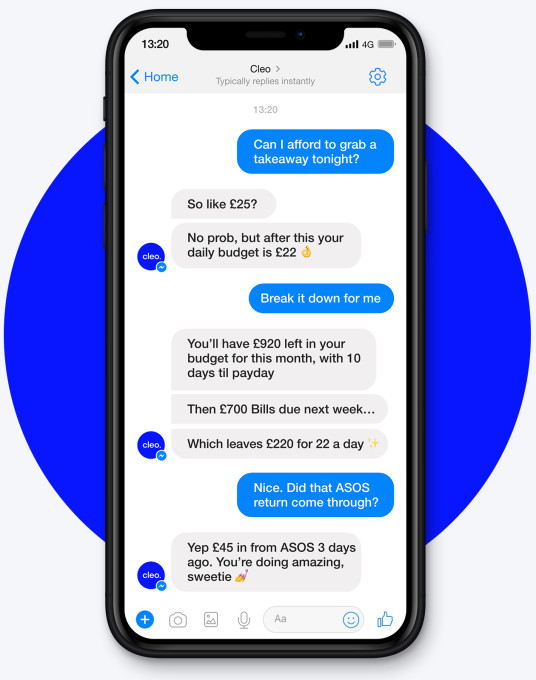 The European venture capital firm, which has previously invested in fintech unicorn Revolut and the well-established GoCardless, has led Cleo’s $ 10 million Series A round, in which I understand most early backers, including Zennström, also followed on. One source told me the Series A gives the hot London startup a post-money valuation of around £30 million (~$ 39.7m), although Cleo declined to comment.

In a call with co-founder and CEO Barney Hussey-Yeo, he explained that the new capital will be used to continue scaling the company, with further international expansion the name of the game. Hussey-Yeo says Cleo will be targeting Western Europe, the Americas and Australasia, aiming to launch in a whopping 22 countries in the next 12 months, as Cleo bids to become the “default interface” for millennials interacting and managing their money.

Primarily accessed via Facebook Messenger, the AI-powered chatbot gives insights into your spending across multiple accounts and credit cards, broken down by transaction, category or merchant. In addition, Cleo lets you take a number of actions based on the financial data it has gleaned. You can choose to put money aside for a rainy day or specific goal, send money to your Facebook Messenger contacts, donate to charity, set spending alerts and more.

However, in the context of traction and Cleo’s broader global ambitions, it is the decision not to become a bank in its own right that Hussey-Yeo feels is really beginning to bear fruit. His argument has always been that you don’t need to be a bank to become the primary way users interface with their finances, and that without the regulatory and capital burden that becoming a fully licensed bank brings, you can scale much more quickly. I have a feeling that strategy — and its pros and cons — has a long way to play out just yet.

Startups Weekly: This year in startups

Manchester forces Tier 4 residents to QUARANTINE if they enter region

The new age of ICOs is here, and it’s not based on Ethereum

Zizoo, a booking.com for boats, sails for new markets with $7.4M...