Tado, the smart thermostat and AC control maker, has raised a further $ 50 million in funding from an array of noteworthy and strategic investors. Backing the Munich-headquartered company this time around is Amazon, E.ON, Total Energy Ventures, Energy Innovation Capital, Inven Capital, and the European Investment Bank.

It brings total funding to $ 102 million since being founded in 2011, while the new capital will be used to develop new products and to extend its service offerings. The latter already includes “proactive” boiler maintenance via data the app collects and analyses and Tado’s 40,000 strong network of heating engineer partners.

That Amazon has chosen to invest is probably the most interesting aspect of this new financing round. The e-retail and technology giant has made multiple moves into the smart home space over the last few years, including acquisitions such as Ring (smart doorbell and security), and Blink (more smart doorbell and security cameras). Prior to buying Ring it was an investor via its Amazon Alexa Fund, and has also backed U.S. focussed smart thermostat company Ecobee.

Zooming out further, Amazon’s Echo powered by Alexa has positioned itself as the device that can bring the disparate smart home ecosystem under a single voice interface, alongside competitors Apple (Siri) and Google (Google Home), of course. (Tado supports all three digital assistants and is sold by Amazon and in Apple retail stores). Amazon has also ventured into smart home device installation and other home services, and given that Tado has a strong services component, the strategic fit looks even stronger.

In a call with Tado co-founder Christian Deilmann, he reiterated the three pillars of the company’s offering. The first is helping you manage your home’s climate to make it more comfortable and convenient/cost-effective. This includes being able to connect your existing central heating or air conditioning to the internet for remote and smartphone control, but also geo-location and other “smart” features that detect when residents are leaving or approaching home, the weather is changing, or when windows are opened. 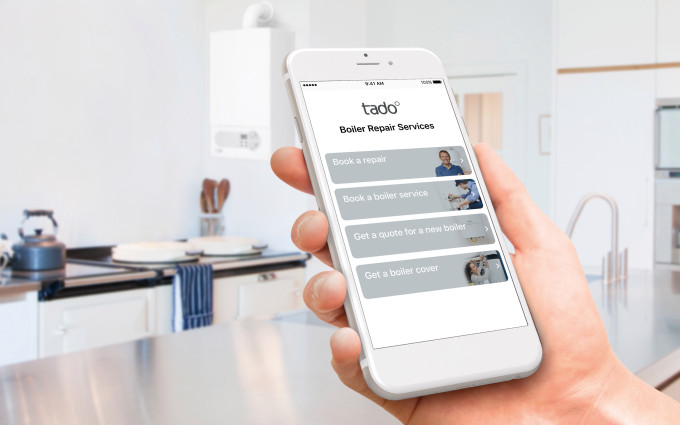 However, as we’ve noted before, Tado’s engineering play goes deeper than simply smart phone and location-based control of your home’s heating and cooling systems alone. The startup’s smart thermostat has been painstakingly engineered to be able to connect to the digital serial interface of thousands of different boilers/manufacturers typically found in heating systems in Europe and in newer systems in general. This enables the Tado cloud to do a number of interesting things, such as modulating heating, rather than simple switching the boiler on or off, and provide remote diagnostics — which is where Tado’s second pillar, its service model, comes into play.

Longer term, a third pillar will see Tado more directly benefit energy management overall, including at the national grid level. In practice this means partnerships with local utilities companies — a number of pilots are already underway — to enable Tado and its customers to opt into ‘demand response’ schemes so that a home’s heating and cooling systems are utilised where possible outside of known peak energy times.

This could be as simple as turning your heating down by a few points without it really being noticeable or heating your home up a little ahead of time. In aggregate, this can make a tangible difference to the national grid’s ability to stabilise energy consumption, something that becomes ever more crucial as more renewable energy that is sporadic in nature, such as wind and solar, is supplied to the grid.

Meanwhile, energy company E.ON joining this latest funding round builds on a number of partnerships that Tado has with utilities companies as a route to market other than its B2C sales in retail stores. Deilmann tells me Tado can be purchased from over 30 utility companies and that B2B makes up around 50 percent of sales. The company also counts Čez Group, a multinational energy conglomerate based in the Czech Republic, and Statkraft Venture Capital, the investment company of Europe’s largest producer of renewable energy, as previous backers.

What’s up with tiny checks at giant valuations?

iPrice, a platform for comparison shopping in Southeast Asia, raises $10...